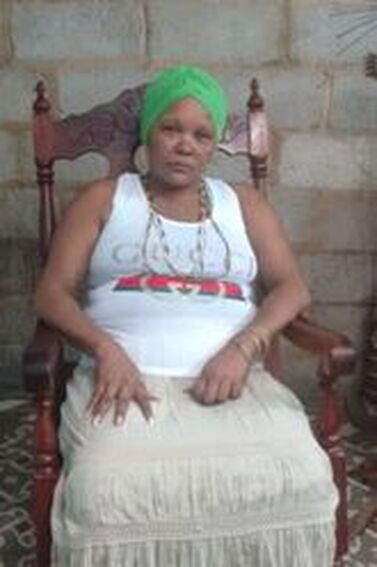 CHARGES: One count public disorder, two counts disobedience/contempt, and one count of assault/attack. As a joint penalty she will face eight years in prison with additional restrictions on travel.

SUMMARY: Donaida Pérez Paseiro, President of the Association of Free Yorubas of Cuba, was arrested on July 16, after voluntarily surrendering herself in compliance with a summons issued after her participation in peaceful protests on July 11.

Ms. Pérez was held at Caibarien Prison in Villa Clara until July 19, when she was transferred to Guamajal prison in Santa Clara, following a ruling by the District Attorney of Placetas to hold Ms. Pérez in provisional prison as a precautionary measure until a trial is held.

Another member of the Free Yorubas attempted to visit Ms. Pérez on July 23, but was not permitted to meet with her face-to-face because she was allegedly held in COVID isolation. Guamajal prison has been placed under lockdown since mid-August as COVID-19 cases spike in the region. Family members have not been permitted to visit with Ms. Pérez, or any other prisoners, while the facility is under quarantine. Ms. Pérez has a history of hypertension, though her current health status and overall situation are unknown.

Weeks before the July 11 protests, Pérez, along with another member of the Free Yorubas, submitted a complaint with the People’s Court and Prosecutor’s Office of Placetas, Villa Clara, regarding dozens of religious freedom violations committed against the Free Yorubas. The complaint, which was successfully filed after some pushback by Cuban authorities, also called for an investigation into the violations against religious liberties protected by the Cuban constitution.

On September 22, 2021, the Municipal People’s Court of Santa Clara, Criminal Section, issued its findings listing the charges filed against Ms. Pérez and several other participants in the July 11 protests in Placetas. Ms. Pérez was charged with one count of public disorder, two counts of disobedience/contempt, and one count of assault/attack. As a joint penalty she will face eight years in prison with additional restrictions on travel.

Ms. Pérez has been targeted by Cuban police for several years as a leading member of the Free Yorubas. In September 2020, Pérez along with another female member of the association were arrested, physically assaulted by Cuban police, and held overnight. Pérez sustained injuries to her face and torso. Earlier that year, in February 2020, Pérez was arrested alongside her husband and current Vice President of the Free Yorubas, Loreto Hernández García. The couple was interrogated for two hours as State Security threatened abuse in a variety of ways including the desecration of ceremonial objects and imprisonment for alleged visits to the home of a known dissident to recruit for the Association.