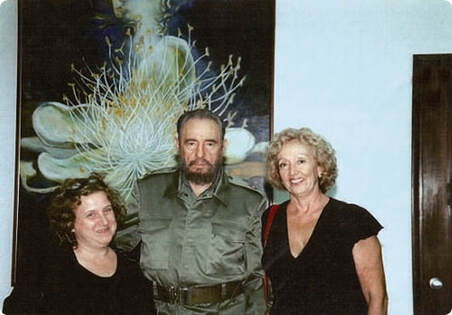 Gustavo Saint Bois Hospital Director Noris Menotti (L), Former Public Health Minister Julia Muñoz (R) with Cuban dictator Fidel Castro at the launch of Uruguay's "Mission Miracle." (Source: Miracle Mission website)
After the trade in illegal drugs, slavery and human trafficking are two of the most profitable criminal activities in the world today. This gross violation of fundamental rights takes place every continent and the victims includes men, women, and children from every walk of life imaginable. As part of its mission to defend fundamental rights and strengthen the rule of law, the Global Liberty Alliance is committed to helping uncover trafficking in persons in the Western Hemisphere and hold modern-day slave traders to account.

Just 90 miles from the United States, socialist Cuba, with the assistance of various Caribbean, South American, and Central American nations, has propped up an international network that traffics in persons who have been denied various fundamental individual rights.

After several months of investigation, on July 16, 2020, GLA announced that a complaint was filed with Uruguay's National Institute of Human Rights and Ombudsman Office (INDDHH) - Uruguay's human rights agency - to compel the release of records related to Uruguay's contracting medical workers from Cuba and to urge the INDDHH to investigate the trafficking in Cuban medical professionals in that country. The INDDHH can also take other steps to ensure compliance government agencies in Uruguay are abiding by labor laws and other human rights laws.

Before the complaint was filed with the INDDHH, the Global Liberty Alliance requested and published more than 100 pages of records (linked at the bottom of this page) that show Uruguay's business arrangement with Cuba. The records include an agreement between Uruguay's Ministry of Social Development and Cuba's Ministry of Health whereby the parties contracted for the services of Cuban medical professionals including doctors, nurses, and potentially other medical professionals in exchange for funds and business arrangements. A report on the records will be published in fall 2020.

The Global Liberty Alliance has met with medical professionals who used to serve on the Cuban missions and will continue to do so as this matter progresses in Uruguay's human right system that could result in additional litigation against public and private parties. The Alliance's aim is to expose trafficking practices and hold to account those responsible - in the public or private sectors - for trafficking in Cuban medical workers, or those who engaged in other unlawful activities under Uruguay and U.S. laws.

If you have information about Cuban medical mission in Uruguay or anywhere in the Western Hemisphere, please contact us.
General Background on Cuba's Medical Missions
Brief Overview of Cuban Health Internationalism
According to the Cuban government, Cuba has sent more than 400,000 healthcare workers to 164 countries since the 1960s. As of March 2020, over 28,000 Cuban healthcare workers (including 18,000 doctors) were in 59 countries. Between March and June 2020, over 3,000 healthcare workers were sent to 30 countries for COVID-19.

While a noble undertaking to help others in need, the Communist Party of Cuba has, in many respects, weaponized the practice of medicine for political and economic purposes and they have done so on the backs of Cuban medical professionals whose labor rights are routinely violated. In fact since 2005, Cuban missions have become one of Cuba’s largest source of income.

For example, remittances to Cuba from the United States are estimated to be somewhere between $4 to $8 billion (in U.S. currency) a year. In 2018 alone, social and health-related services allegedly generated $6.4 billion for Cuba - that is three times the income that Cuba generates from tourism.

Contract Stipulations and Payments
Cuban state-sponsored entities contract with foreign governments so that the Cuban health workers go to that country for 2-3 years, with the understanding that the program can include teaching and the sale of medicine through Cuban state-owned enterprises.

The Cuban healthcare workers are not allowed to work outside of their contract, and receive only 5-25% of their compensation, depending on the country. Most of the Cuban workers' compensation is allegedly saved in a Cuban bank account and they are granted access only upon completing the mission and returning to Cuba.

Some countries have a sufficient pool of medical professionals to meet local public health need; however, they opt to contract for Cuban medical workers for political and economic reasons.

Medical Training and Qualifications
The Cubans do not need to have their medical training or degrees validated in the host countries. Patients are typically very poor, do not have insurance, and will rarely, if every complain to local officials about problems with care. Keep in mind that participation in the Cuban international medical brigade program is only open to the vanguard of the Communist Party. The candidates are each selected on a wide range of criteria that include a candidates's social record that has been carefully compiled since birth and the family's socioeconomic background. Anyone who harbors views that go against the socialist revolution is not selected to participate in the international program and, likely, would not even be allowed to study medicine at the university.

Working Conditions
While serving in a medical brigade, Cuban health workers are subject to arbitrary restrictions, including checking in at a set time to a brigade leader. The brigade leader is usually not a health professional, but rather a intelligence official who works for the Cuba's secret police, the Ministry of the Interior.

The Cuban medical professionals are under constant vigilance by minders, to whom they must surrender their passports before or upon arrival at the host nation. Cuban medical workers must follow the guidelines of the brigade program or face disciplinary action that includes fines, loss of income, or political and other retributions targeting family members who remain on the island.

In some nations, Cuban medical workers are posted in some of the worst, crime-ridden neighborhoods without adequate personal protection.  Cuban workers must leave their families in Cuba, and if they abandon the mission or do not return to Cuba afterward, they are prohibited from reentering Cuba for 8 years.

Finally, Cuban officials and defenders of the program in the United States argue medical professionals who participate in the missions sign agreements and are not forced to participate. While Cuban medical workers sign agreements with Cuban entities that set the terms of engagement, based on materials the Alliance has reviewed the agreements amount to contracts of adhesion or a "take it or leave it" arrangement that, at times, is signed under duress.

Results of Cuban Medical Missions
The much-publicized Cuban brigade arrivals at international airports are misleading, designed for propaganda. When it comes to hard facts about the public health successes of the brigade program, the reported results of these missions are unreliable, as the Cuban workers are ordered to alter any unfavorable statistics.

Benefits for Cuba
The medical missions have many benefits for Cuba, aside from the obvious monetary ones. The missions buy political loyalty through political influencing of host government politicians and businesses; they legitimize the Cuban socialist system with propaganda campaigns in host nations; they help prop up a constellation of state-owned enterprises such as BioCubaFarma, MEDICUBA, S.A., EMSUME, S.A., and EMCOMED, S.A.,; they help the Communist Party secure foreign assistance in the form of loans and investments; they offer opportunities to gather intelligence and insights into host governments and populations; and they leverage political and ideological agenda from allied governments.

(Data based on research conducted by Cuba Archive and other sources. See Cuba Salud for more information.)
Background on Cuba's Medical Mission in Uruguay
Uruguay was the first Latin-American country to restore relations with Cuba in 1985 after the breakup of the members of the Organization of American States (OAS) in 1964. The medical missions from Cuba in Uruguay were established during the presidency of Dr. Tabaré Vázquez.  Dr. Vázquez was part of the left-wing Frente Amplio (Broad Front) who pressed for the new relationship with Cuba under a 1987 bilateral Economic-Industrial and Technical-Scientific Cooperation Agreement.

In 2007, Uruguay officially incorporated itself into Operation Miracle, a free ophthalmological program for low-income patients treated by Cuban professionals and paid for by Venezuela as part of The Bolivarian Alliance for the Peoples of Our America (ALBA), a leftist regional integration program used by Cuba and Venezuela to undermined the OAS system and U.S. national and security interests. The Uruguayan government allocated a building for surgeries and allegedly agreed to pay Cuba $800.00 (U.S. currency) a month per worker. The agreement involved the Social Provision Bank (BPS), and supposedly benefited the retired persons and pension holders.
​
As a result of a November of 2007 agreement between the Ministers of Public Health from both countries created the ophthalmological teaching and research center Jose Marti Eye Hospital in a Saint Bois Hospital ward. In 12 years, 60 Cuban doctors have allegedly worked at this center, most of them for 2 year rotations. They have purportedly  completed more than 90,000 surgeries. In 2012, the agreement was renewed, keeping 20 Cuban doctors, and the BPS assumed an additional $250,000 cost for tickets and other travel expenses that was originally paid for by Cuba's Ministry of Public Health (MINSAP).

In 2008, another bilateral agreement was struck, covering orthopedic services for people with disabilities by Cuban and Uruguayan medical professionals. The program is sponsored by Uruguay's MIDES (the Ministry of Social Development) and costs $174,000 every year. Also, between 2005 and 2012, 428 Uruguayan doctors on scholarship graduated from the Latin American School of Medicine (ELAM) in Havana.

In 2015, the Uruguayan Parliament cancelled an existing debt of about $50 million from the 1980s that the Cuban National Bank owed to the Central Bank of Uruguay, and justified the move as payment for the ophthalmological surgeries. Opposition members of the Uruguayan Parliament criticized the debt forgiveness package as not proportional and argued it was a form of foreign assistance to Communist Cuba. Opposition lawmakers also stressed that this program gave absolutely no opportunities to Uruguayan doctors to practice medicine and create market dislocations in the Uruguay medical professions.

In August 2019, Dr. Aleyda Guevara, the daughter of Ernesto “Che” Guevara, visited the Cuban Medical Brigade in Uruguay and together they paid homage to the Che Monument in Montevideo, highlighting him as “an example of an internationalist who calls us today to provide healthcare to those in most need.” Despite this and other grave deficiencies of the program pointed out by doctors who defected as well as human rights organizations, Luis Lacalle Pou’s center-right government has confirmed that the Cuban “collaboration” will continue.

Currently, about 30 doctors and healthcare experts, the majority of them ophthalmologists, make up the mission. The mission is medical lead is Dr. Jose Ernesto Hernandez, a specialist in internal medicine. As opposed to Uruguayan and other professionals, the Cuban doctors do not have to certify their postgraduate degrees with the Public Health Ministry in order to practice.

Nine Cuban doctors have deserted the mission, and seeking to enter the Uruguayan healthcare system, and validate their ophthalmology degree in the Graduate School of Medicine, which recognizes degrees from other countries. Six of them did not pass the exam, and the other three did not receive a definitive final score, which sounded off alarm bells for Uruguayan professionals.

(Based on research conducted by Cuba Archive and other sources in Uruguay. See Cuba Salud for more information.)
​
Global Liberty Alliance Legal Measures in Uruguay

Along with the July 16, 2020 complaint filed with the Uruguay's National Institute of Human Rights and Ombudsman Office - Uruguay's human rights agency - below are two sets of records obtained by the Global Liberty Alliance in Uruguay. Additional records and case material will be added as the matter progresses in the Uruguay legal system and their Congress.