The most populous Central American country, Guatemala has a civil law system, with judicial review of legislation enacted by the unicameral Congress. The United States is one of Guatemala’s largest trading partners, with both countries being parties to the 2006 Central America-Dominican Republic Free Trade Agreement (CAFTA-DR), which aims to facilitate trade, investment, and regional integration, according to the U.S. Department of State. Guatemala exports agricultural products, clothing, gold, and silver to the U.S., while it imports American oil, agricultural products, donated articles, and machinery. Nonetheless, security concerns, and a shortage of skilled workers and poor infrastructure have limited foreign direct investment.

Guatemala has the largest economy in Central America, with regular economic growth in recent decades, though that economic strength has been undermined by growing economic inequality and poverty, according to the Congressional Research Service. So long as market forces, deregulation, and a strong legal system take root to protect individual rights, the people of Guatemala will continue to bridge those gaps.

Guatemala’s GDP per capita is approximately 50% of the average for Latin America and the Caribbean. Guatemala is the top remittance recipient in Central America, with remittances equaling two-thirds of the country's exports and about a tenth of its GDP. According to U.S. government sources, the richest 20% of Guatemalans account for over 51% of Guatemala’s total consumption, and over half the population is below the poverty line, particularly indigenous groups.
​
According to some policy experts, Guatemala has struggled since the end of the civil war that ended almost twenty-five years ago to deal with policy challenges such as corruption. Guatemalan jurists are working to lower the incidence of corruption in society but that will take time and patience. Some argue that forcing solutions from the outside, such as the failed and, ironically, corrupt United Nations International Commission against Impunity in Guatemala, or CICIG, has made matters worse. The GLA believes Guatemalan jurists and officials are committed to tackling these challenges in a variety of ways. Many want outside support only with consent from local elected officials, in order to respect national sovereignty and national institutions. Guatemala has several law schools as well as a constitutional form of government with checks and balances that provide the nation a platform to tackle whatever comes their way. One standout institution is Guatemala’s Public Ministry, responsible for public prosecution and law enforcement in the nation, which investigates corruption and human rights abuse allegations.

The Global Liberty Alliance (GLA) is dedicated to helping Guatemalan jurists strengthen the rule of law in Guatemala and throughout Latin America by supporting counsels and civil society leaders committed to improving the legal system as well as seek accountability for violations of fundamental rights such as the right to property, freedom of expression, and other human rights. At present, GLA is working to expose unlawful trafficking in persons, such as Cuban medical workers. This effort is ensuring Cuban medical workers are treated fairly according to local labor laws and the contracting with Cuba was done according to labor laws and regulations 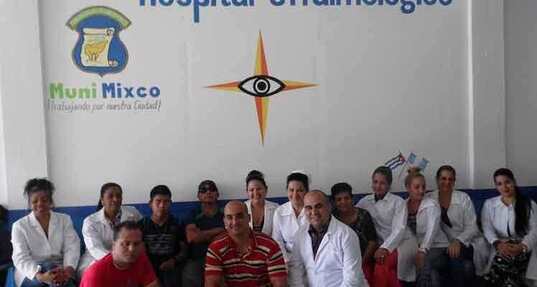