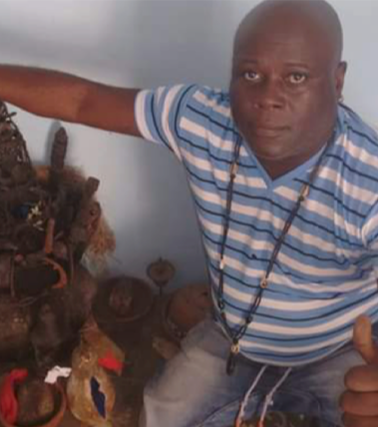 CHARGES: One count public disorder and two counts of disobedience/contempt for a total of eight years in prison, confiscation of personal finances, and additional travel restrictions.

SUMMARY: Loreto Hernández García, Vice President of the Association of Free Yorubas of Cuba, was unlawfully arrested on July 15, and held in police custody following the peaceful protests and demonstrations last month. He was taken to Caibarien Prison in Villa Clara following his arrest, and placed in isolation after being exposed to another prisoner with COVID-19.

On July 19, Hernández along with other members of the Free Yorubas, were charged with public disorder, disobedience, spreading the epidemic, and incitement. The District Attorney of Placetas ruled they would be detained in provisional prison as a precautionary measure until a trial is held.

Mr. Hernández, who suffers from several pre-existing medical conditions including high blood pressure, chronic asthma, chronic hypertension, diabetes, and other cardiac problems, previously reported to family members that his health has continued to deteriorate while in prison. The most recent diagnosis of pre-infarction is very concerning based on his medical history, and places him at risk of lethal complications.

In mid-August, Hernández’s daughter received word he was being denied medical treatment and was informed that witnesses in the prison saw a progressive deterioration of his health, most likely related to his untreated diabetes and arterial hypertension. Family has been unable to communicate with Hernández while the prison facilities in Santa Clara are on lockdown because of spikes in COVID-19 cases.

On September 22, the Municipal People’s Court of Santa Clara, Criminal Section issued it’s findings, listing the charges filed against Mr. Hernández and over ten other participants in the demonstrations that took place on July 11. In the prosecutor’s findings, in addition to charging Hernández with public disorder and contempt, they also claimed the religious leader to be aggressive and maintaining poor relations with neighbors.

Loreto along with the others charged in the prosecutor’s indictment now wait for a court date where they will go before a judge to face the charges brought against them.

As a leading member of the Free Yorubas, Hernández has been targeted by Cuban authorities for many years. In February 2020, he was arrested alongside his wife and current President of the Free Yorubas, Donaida Pérez Paseiro. The couple was interrogated for two hours as State Security threatened abuse in a variety of ways including the desecration of ceremonial objects and imprisonment for alleged visits to the home of a known dissident to recruit for the Association.